DROPLETS ON DEMAND IN MICROFLUIDIC NETWORKS

Two-phase flow microfluidics allow to perfom different laboratory functions on one microfluidic Lab-on-Chip (LoC) platform. An example of such an application is the controlled production of droplets on chip. Up until now, the sequence of elements by which droplets containing biological/ chemical samples are produced was fixed, limiting the flexibility and reusability of such LoC devices. Introducing microfluidic networks for two-phase flow microfluidics allows the construction of programmable and flexible LoC devices, that assign the droplets’ path dynamically, thus allowing the reuse of the LoC device for different laboratory functions. This article summarizes the work of Medina Hamidovic, who is currently conducting her PhD thesis in the group of Dr. Andreas Springer at the Johannes Kepler University Linz, that developed a new practical solution for on-demand droplet-pair generation. For the complete article, please visit  Nano Communication Networks and the University homepage.

The aim of lab-on-chip (LoC) devices is to transfer full processes currently carried out in a scientific lab using different (and usually expensive) apparatus onto a microfluidic chip where small volumes of liquids will be moved through the different process stages and provide more accurate results than traditional methods whilst using less sample volume, less space, less time and less energy.

One of the main hurdles of LoC devices has been the lack of multiple paths and selective branching capabilities on-chip that would allow more complex operations. Current LoC systems have usually one unique microfluidic path with no possibility for a deviation. Researchers have been looking for practical solutions to selectively direct fluids in either one of two different channels and recently focused on a new type of setup called microfluidic switches. Microfluidic switches are in-built chip features that control the path of a single, or multiple, droplets containing biological/chemical samples (payload droplet) by sending a controlling (header) droplet in front or after the payload droplet, thus creating a microfluidic network.

An easy way to generate pairs of header and payload droplets with the ability to vary their size and timing is descirbed in Hamidovic et al., 2018 “Passive droplet control in microfluidic networks: A survey and new perspectives on their practical realization” in Nano Communication Networks [1], and in “First Practical Realization of Switching in Microfluidic Networks” for the 4th Workshop in Molecular Communication [2], presenting an elegant way to generate non-identical droplet pairs. It provides significant improvements to the current state-of-the-art.

Several methods for droplet-on-demand generation (i.e. methods for controlling the payload and the size of droplets combined with precise timing of droplet generation) have been described in the literature [3, 4]:

A commercially available device for generating droplets on demand, the Mitos Dropix © droplet generation pack from Dolomite Microfluidics, has been on the market for several years but its high cost and low user-friendliness (especially the need for the users to balance the surface tensions of their samples to make it work) have impaired its overall success so far.

Prior to the work of Hamidovic and colleagues, methods for droplets-on-demand described in the literature and/or commercially available were expensive, requiring several pieces of equipment, and applicable to single channel microfluidic chips, making them not compatible with the requirements for microfluidic switches and, more generally, advanced lab-on-chip systems.

In Hamidovic et al., 2019, the microfluidic chip used for droplet generation has two T-geometries in cascade. Each T-junction generates a specific kind of droplet. The working principle of the system relies on the pressure pump toggling between two pressure states: equilibrium state, during which no droplets are generated, and the pulsing state, where equilibrium is overcome and during which the droplet generation takes place. By controlling the duration of the applied pulse, it is possible to control the size/volume of the generated droplets. Moreover, by controlling the time period between the two successive pulses, it is possible to control the distance between two droplets. 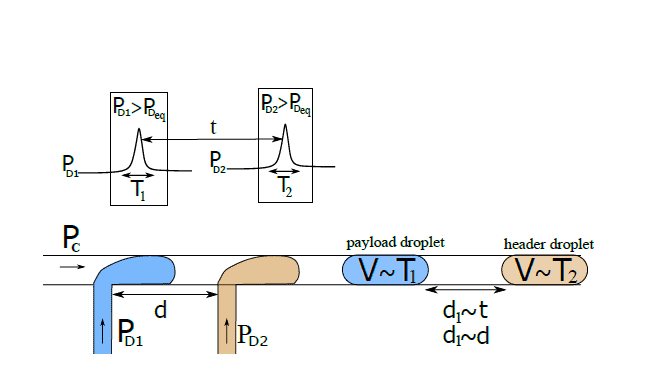 The ultra-fast pressure control brought by Elveflow’s OB1 piezoelectric technology enables smooth droplet generation not possible with other pumps on the market.

The simplicity of its use and low requirement for equipment (only 3 pressure channels) make it a new state-of-the-art method for complex droplet-on-demand generation that presents several advantages over previous methods and make it especially suitable for microfluidic switch application.

The droplet-on-demand microfluidic setup described in this article is an elegant and easy-to-use system that facilitates the generation of droplets of various content and size thanks to highly precise pressure spikes generated by a piezoelectric pressure pump. This new approach is an attractive solution for complex LoC systems where multiple samples are directed through different channels of a microfluidic network. 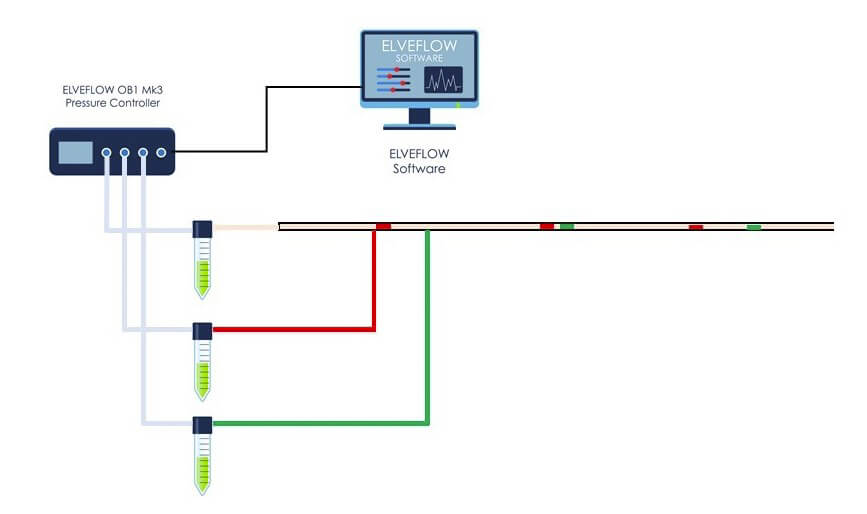