Gut-on-chip: keeping up with the technology 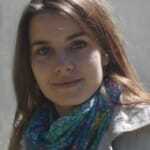 Julie Cavallasca, scientific translator, studied languages and translation at Aix-Marseille University and Paris 7 Diderot University. She now works for for Elvesys and the NBIC Valley. 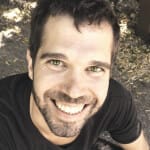 Dr. Guilhem Velve Casquillas is the CEO of Elvesys and co-founded many innovative companies. He is a former cellular biology researcher at the Curie Institute and in microfluidics.

Gut-on-chip: keeping up with the technology 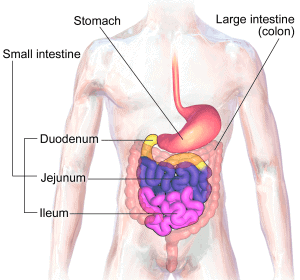 Figure 1: Anatomy of the digestive system

The intestine fulfills a lot of important body functions, especially concerning the transport and oral absorption of drugs and nutrients, one of the key phases in pharmacokinetics. There is also an immune function, less known, which would require extensive research. Despite this central role, we are far from a perfect understanding of all its mechanisms, and there is an urgent need for an effective model of this complex and major organ. Moreover, a lot of adverse drugs effects are affecting the gastrointestinal tract, and a lot of gut inflammations have unknown causes, like it is the case for the Crohn’s disease. Finally, there is growing evidence for the huge impact of microbial symbionts on the intestine’s health. This characteristic is not often investigated in vitro, because of the difficulties in matching growth conditions between host cells and microbes. Nevertheless, it remains a key parameter, because of the central role of the human microbiome in intestinal health and diseases [1], and the development of an in vitro platform to study host-microbe interplay is now critical.

Tests on this organ in vivo were mostly done on animals; which always raises more controversy on the ethical front, and turns out to provide results that cannot always be applied to humans: a drug can be toxic for rats and not for humans, and inversely.

A previous technique of intestinal epithelial cell culture in vitro used mostly static culture models, like it is the case with the Transwell chambers (Corning Inc., Lowell, MA). This 3D cell culture made a step towards “in-vivo-like” environments with porous membranes and apical/basolateral sides for the chambers. Nevertheless, it is still missing crucial characteristics of the intestinal tissue to be a good predictive model of the intestine.

Given the complex functions of absorption and transports of nutrients and drugs that we just saw, the intestine is the place where different unique features are combined: a considerable surface, achieved by intestinal villi and microvilli of the epithelial cells necessary for the absorption; an intestinal microbiota formed by billions of bacteria and peristaltic movements essential for the transport of nutrients along the gastrointestinal tract [2].

These are the characteristics missing in the static models that are replicated in this gut-on-chip in order to properly mimic the mechanical, structural, absorptive and pathophysiological properties of the human gut, combined with microbial symbionts. The main advantages of this advanced model are a better reproduction of the in-vivo environments, with controlled microfluidics parameters and a reduction of the delays and costs of research.

Technical characteristics of the gut-on-chip 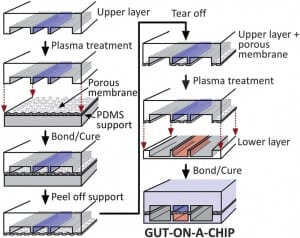 In Hyun Jung Kim and al., human gut-on-a-chip inhabited by microbial flora that experiences intestinal peristalsis-like motions and flow [3], they successfully designed a gut-on-a-chip with the previously listed characteristics of interest, which is why we decided to present their results in this review. The microdevice was composed of two aligned microchannels (upper and lower), made by casting polydimethylsiloxane (PDMS) prepolymer on a microfabricated mold and separated by a porous (10 um diameter circular pores) flexible membrane (also in PDMS prepolymer) coated with extracellular matrix (ECM) and lined by human intestinal epithelial cells that mimics the complex structures and physiology of living intestines.

They used Caco-2BBE human colorectal carcinoma cell line for the human intestinal epithelial cells. This cell line, originally obtained from a human colon adenocarcinoma, has been extensively used over the last twenty years as a model of the intestinal barrier [4], [5]. 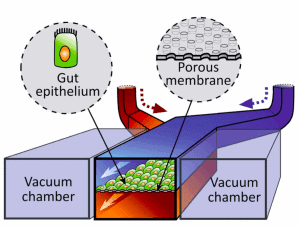 The physiological peristaltic motions and gut microenvironment were recreated by flowing fluid at a low rate (30 µl/h) producing low shear stress over the microchannels, and by exerting cyclic suction applied to the vacuum chambers positioned on either side of the microchannels, causing the porous membrane to periodically stretch and relax. This cyclic suction was regulated by a computer-controlled vacuum manifold.

The central role of human microbiome in intestine function was also investigated: they performed a co-culture in the chip, using both Lactobacillus rhamnosus GG (LGG) cells, which was originally isolated from human gut, and Caco-2 cells. These normal intestinal microbes were cultured on the apical surface of the epithelial cell monolayer.

Results obtained with the gut-on-chip

A parallel study using the Transwell chambers method was performed as control, to be able to correctly compare this static model with the gut-on-a-chip way of intestine cell culture. In these control studies, the Transwell plates contained porous polyester membrane inserts that were pre-coated with the same ECM mixture used in the gut-on-chip device; and the Caco-2 cells were plated at the same density to ensure the same basis of culture conditions.

At the end of both studies, they showed that cells grown under static conditions were highly flattened and almost squamous; whereas those in the gut-on-chip were 6-fold taller in size and developed a columnar shape that polarizes rapidly, spontaneously grows into folds that recapitulate the structure of intestinal villi. Those characteristics were almost the same as reported for cells within healthy human intestinal epithelium in vivo, and shown to be directly dependent of the fluid flow exerted in the chip. This structure also forms a high integrity barrier to small molecules, which recapitulates another function of the intestinal cells. This integrity was established by measuring the transepithelial electrical resistance (TEER). 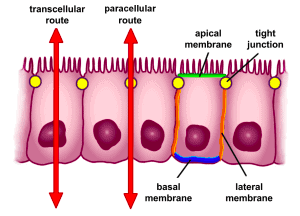 In addition, the culture of normal intestinal microbes for extended periods on the luminal surface of the cultured epithelium was a success. Indeed, the results showed that both LGG and Caco-2 cells remained fully viable after the co-culture. The presence of microbes also brought significant advantages: it improved barrier function over time, as observed in humans, and increased intestinal epithelial integrity. In the Transwell system, the LGG cells grew without constraint in the stagnant apical chamber, which caused acid Ph and a low intestinal cell survival. This radical consequence was avoided in the gut-on-a-chip, thanks to the continuous flow that was exerted, causing the clearance of both organic acids and unbound LGG cells. The human intestinal epithelial cell functionality was measured by quantitating the specific activity of the aminopeptidase.

Further applications of the gut-on-chip device

This gut-on-a-chip provides a better model of the whole intestine than the previous Transwell chambers, by recreating multiple dynamic physical and functional features of human intestine critical for its function, as well as a controlled microfluidic environment amenable for transport absorption and toxicity studies. These recapitulations of the mechanically active microenvironment of living intestine (peristaltic motions and intralumenal fluid flow) also permits a normal growth of microbial flora without compromising human cell viability.

In summary, this device is a good reproduction of the human intestine, and thus has a promising future. The intestine is an essential organ, and still not perfectly understood, due to its complex combination of characteristics. This chip would facilitate study of mechanoregulation of intestinal function, as well as host-microbe symbiosis and evolution. It also would offer a platform for drug screening and toxicology testing. Research on multiple gastrointestinal diseases would benefit from it, like for the Crohn’s disease, the causes of which are still unknown. The animal models concerning tests on metabolism, transport and oral absorption of drugs and nutrients could be avoided. This current method of research raises ethical controversies, and provided results that are not always applicable to humans, creating an urgency for the development of alternatives, like this example of organ-on-chip. We could argue that this model is a significant simplification of the reality, but there is a possibility of progressively adding other features. For example, blood could be directly used as flowing fluid, instead of the current medium. Another opportunity would be the development of a gut-liver-on-a-chip; that could allow research on the first-pass effect in the metabolism of drugs and nutrients [6].

[5] Sambuy Y.; et al. (2005), The Caco-2 cell line as a model of the intestinal barrier: influence of cell and culture-related factors on Caco-2 cell functional characteristics.

Written by Emilie Grandfils, corrected by Julie Cavallasca, under the supervision of Dr. Guilhem Velve Casquillas