Live-cell imaging is a non destructive method which focuses on the observation of live cells and is widely used in cellular biology research and biomedical industry. This short review will present some technical aspects and challenges encounter in this field.

If you are interested in a perfusion sytem for live-cell imaging, check our Perfusion Pack.

Nowadays, the most widely used cell culture system is static culture, where the cells are cultivated inside Petri dishes or multiwall plates. In static culture, the culture medium is supplied in a batch-wised manner. Static cell culture systems have the advantages of being economical and easy to use. But in term of long-term cell culture, they present important flaws. The first drawback is the high risk of contamination caused by repeated manual interventions. The second one is the fluctuation of the cell environment due to the medium replacement process.

Perfusion culture also allows long-term study under microscope. With live-cell imaging techniques, it is critical to be able to replace culture medium without opening the perfusion chamber in order. 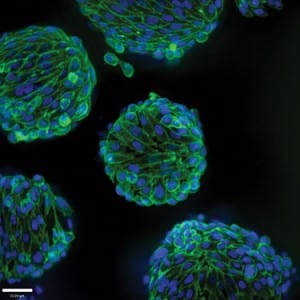 Moreover, perfusion culture is an important tool for 3D cell culture. The goal of 3D cell culture is to obtain a microenvironment mimicking as closely as possible the in vivo microenvironment. Indeed, in their native environment, cells are submitted to various biological and physical cues, such as cell-cell interactions, signalling molecules and mechanics of the surrounding extra cellular matrix.

In 3D cell culture, cells are seeded on a 3D scaffold material. This scaffold makes difficult manual interventions such as medium changing. Perfusion systems can thus be useful to overcome this issue.

Perfusion cell culture is certainly more challenging than conventional static cell culture, but allows to have a more precise control over cell microenvironment, which makes it an interesting tool for a wide range of biological applications.

One critical aspects of a perfusion cell culture system is the choice of the fluid delivery method. Several types of pumping mechanisms are available.

The principle of this technique is to apply a controlled flow of air inside a reservoir containing the perfusion medium in order to create a pressure-driven flow. The main advantage of this method is that it results in a very stable, pulse-less flow rate, even at very low flow rates. 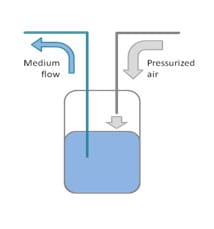 In a peristaltic pump, the fluid is contained inside a flexible tube fitted inside a circular pump casing. A rotor, equipped with several rollers, turns and the roller compress the tube, forcing the fluid to move though the tube. One advantage of this technique is that peristaltic pumps can be miniaturised and integrated inside microfluidic chip to obtain autonomous perfusion cell culture systems. However, this type of pump is not able to generate a very stable flow rate, especially at low flow rates. 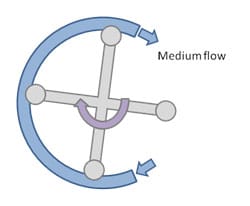 In a syringe pump, the fluid in held inside a syringe and a motor apply a pressure to a syringe plunger. This method is very effective to deliver small volume of fluid but, as peristaltic pump, is not suited for stable low flow rates. 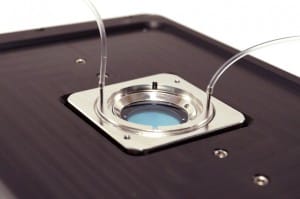 The first live-cell imaging chambers were designed in the early twentieth century, shortly after mammalian cell culture techniques were developped. A wide range of perfusion chambers is now available, from simple sealed coverslip on a microscope glass to sophisticated perfusion chamber allowing a full control of the cells environment. Recently, the advance  of microfluidics has led to the developpement of integrated cell culture system.

Perfusions chambers are a critical aspect of live-cell imaging, and they must fulfilled two equally important requierements: maintain cells in a healthy state and allow the living cells to be observed with the highest possible resolution. 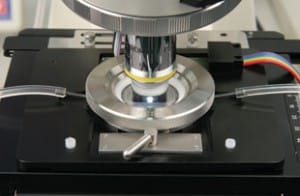 Two main categories of culture chambers are available. The first category is open chambers. They are more basic and very similar to Petri dishes. With open chambers, the medium surrounding the cells slowly approaches the equilibrium with the surrounding atmosphere during the experiment. They allow to easily access the cells, but exhibit a low level of control on the cells environment.

Closed chambers are sealed to avoid evaporation of the culture medium and ensure a large control over the environmental variables, such as temperature, pH or carbon dioxide concentration. Most closed chambers are designed with ports allowing the addition of fresh medium or drug during the experiment. Closed perfusion chambers are thus more suited to long term experiments.

Dimensions of the chamber.  The depth of the perfusion chamber should be minimized to obtain the highest possible optical quality for transmitted light. Concerning the coverslip surface area, large viewing areas are more sensitive to leaks and physial damage, but allow the use of high numerical aperture objectives, that often have large diameter barrels.

Flow characteristics. For experiments involving the addition of other agents to the culture medium, such as drugs or growth factors, it is very important to obtain laminar flow, ensuring controlled media exchange. In order to maintain laminar flow inside the culture chamber, the chamber cross section should be very close to that of the inlet tube. Several fluids delivery techniques are available, but the uniformity of the flow should as be taken into account, since hydrodynamic pulses can harm the cells or produce coverslip flex. For more informations, see our review about perfusion systems.

Temperature control. For long term experiments, temperature control of the medium surrounding the cell should be ensured. Many commercial systems include heating elements coupled to the chamber or the mounting stage. However, some parts of the microscope, such as frame and objectives can act as heating sink and disrupt heat stability of the perfusion chamber. Moreover, small changes in ambient temperature can lead to thermal extension or contraction in some part of the microscope, modifying the plane of focus. Systems such as objective heaters or incubater box are available to tighly control the microscope temperature. 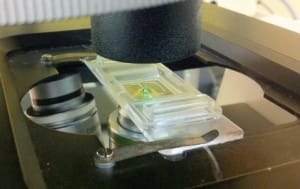 Microscope slides can also be used with warmers, such as Peltier modules or air blowers, for experiments on longer periods of time. 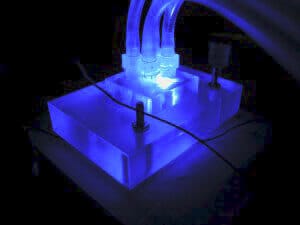 Microfluidics is currently a growing and promising field in biology. Microfluidics allows a high degree of control on cells environment, on flow dynamics and is compatible with existing high resolution microscopes. A lot of research is currently undertaken in this field, and simple microfluidics chips are already commercially available. Due to the versatility of microfabrication processes, numerous microfluidics lab-on-chips have been developped by researchers for a wide range of applications, from simple shear stress exposure experiments to complex organs on chip. For more information, consult our review about microfluidics and cell biology.

Hydrodynamic shear stress can be a limiting factor for perfusion cell culture. In order o eliminate its effects, it is possible to lower the perfusion flow rate. Some studies have demonstrated that the minimum shear stress shown to affect differentiation or proliferation when applied continuously is about 0.5 N/m2. On the other hand, some experiments take advantage of the phenomena, by using high level of shear stress to investigate for example endothelial cell function or cell adhesion.

Temperature is a critical parameter of the cell environment for long-term studies on live cells. Several temperature control systems designed to be used while performing live-cell imaging are commercially available.

Air bubbles have a strong detrimental effect on cell culture. First, bubble trap inside tubing or microfluidic channels can obstruct fluid flow. Then, bubbles are known to kill cells at their gas-liquid interface. A good way to eliminate bubbles is to apply a high flow rate inside the perfusion system prior to seeding the cells. A soft surfactant medium, like SDS is very effective to release air bubble from perfusion chamber.

Attachment of the cells

One very important requierement is the attachement of the cells to the coverslip, in order to obtain a stable focus plan. Adherent cell lines will be naturally immobilized on the glass covership, whereas non adherent cell lines will have to be stabilized. Several techniques have been used, such as adhesion promoting agents (poly-L-lysin or collagen), or thin agar pad.

Cell culture requiere a carbon dioxide and bicarbonte buffer system in order to regulate pH. In conventionnal cell culture, a controlled atmosphere is created in dedicated incubators. For live-cell imaging, some perfusion chambers are specifically designed to create a regulated atmosphere. However, it is possible to use synthetic biological buffers, such as TRIS or HEPES to control the pH in absence of a controlled atmosphere.